For those who suffered through the boring and pointless Netflix legacy sequel Texas Chainsaw Massacre and thought this should have been better, Ti West has the movie for you. West has reportedly already shot a prequel to his latest film, X, and the confidence that people will like it is on show.

For anyone who saw Ti West’s previous film House of the Devil, you’ll know the sort of area you’re in here. Just as with that feeling like the kind of Wes Craven / John Carpenter stuff on the 80s, this is a throwback to Tobe Hooper and the Grindhouse works that so clearly inspired the life and work of Robert Rodriguez and Quentin Tarantino.

West is a witty director, at times playing with the medium; the opening shot appears to be in the old box aspect ratio until we find out it’s just in a door frame, editing to ape the janky style of drive-in movies is employed. 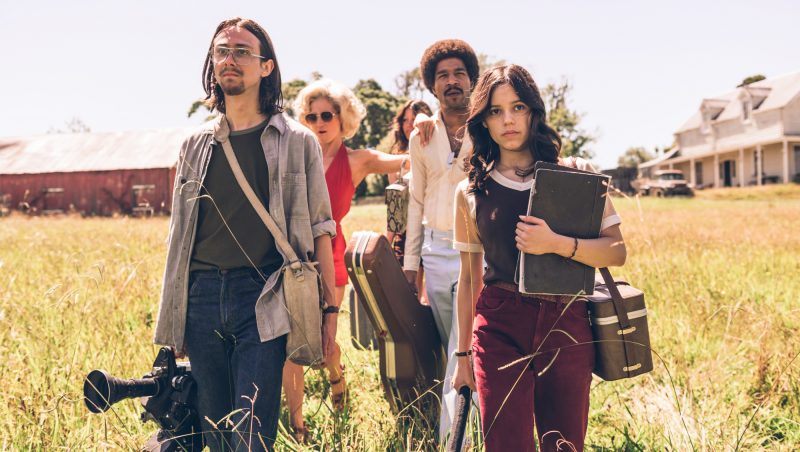 The cast are all massively game. Henderson at times looks like a Dallas-era Patrick Duffy replete with stetson and southern drawl, while Mia Goth carries the film as Maxine. She looks at times like Linda Lovelace during the Deep Throat era but instead of opting for the classic narrative that porn is filled with abused people and damaged individuals there is an element of subverting expectations. Bobby-Lynne and Jackson have an open and mature opinion on sex work, seeing it as acting and nothing more. There’s a nicely subversive stint that actually Bobby-Lynne knows more about how to shoot sex than arty blow-hard RJ does.

There’s sex, and nudity aplenty, including a “oh wow” shot of Scott Mescudi aka Kid Cudi’s weapon of choice, and that, along with a shot of Snow wiping semen off her backside, shows the film isn’t afraid to go trashy. Ortega, who appears to be trying to be in every horror film there is, is also good as the innocent who begins to feel seduced by the world of adult filmmaker; a witty shot shows her to be wearing Sunday underwear just as she preps to join the world.

The film feels like three distinct movements, there’s the fun sexy Boogie Nights section at the start, with faux bad-porn acting and nudity, and there’s the third section with is gore-tastic splatter involving pitchforks, shot guns, hammers and all kind of head crushing nastiness. But the mid-section is strange. West slows the film right down for an exploration of the melancholy of ageing and the desires people still have. The idea that ageing takes away intimacy as the body fails and that people still have these needs is at times thought provoking but in a playful way allows West to then go gross out with toothless Southern banging.

The film’s ramshackle tone and off the wall ideas are often there because that’s how these films were made back in the day and West joyfully employs wink-wink needle drops to underpin the horror and the absurdity. Eliot Rocket’s cinematography often apes the weird camera styles of those cheapo Grindhouse films and the sound too makes it feel like something from the era, but even for people not in know the of that stuff Mia Goth’s performance is what raises this just above a sex and blood horror flick.

May 29, 2022
Holiday How to avoid the deadly legionnaire's bug – Daily Mail

Holiday How to avoid the deadly legionnaire's bug – Daily Mail

May 29, 2022
Sweet and Savory Sausage-Stuffed Apples

May 29, 2022
Link Between Exercise Intensity and Risk of Infection

Link Between Exercise Intensity and Risk of Infection

May 29, 2022
Holiday How to avoid the deadly legionnaire's bug – Daily Mail

Holiday How to avoid the deadly legionnaire's bug – Daily Mail