Some people love leftovers in their original form. This column is for the rest of us.

Depending on the type of ham, leftovers are safe to eat for up to seven days after opening, meaning the ham you cooked Sunday will likely be good for a few more days.

Heat-and-serve or ready-to-eat hams and country hams are generally good for up to seven days after opening. Fresh ham, on the other hand, should be eaten within four days. The leftovers from any ham can be frozen for up to three months without a significant loss in quality if tightly wrapped in aluminum foil or freezer paper and placed in a freezer storage bag.

The following ham salads are two delicious options for using up leftovers, but don’t let a lack of leftovers stop you from making them. The first is bound with mayonnaise and spicy mustard. The second is dressed in an herby vinaigrette.

The original version of the dill ham salad recipe included almost 2 ounces of dill. I didn’t use anywhere near that much and found the salad to be pleasantly dilly. I also cut back on the mustard and made my own Creole seasoning blend. This salad will keep for up to three days in the refrigerator, but keep in mind those three days count toward the four-to-seven-day total.

½ cup mayonnaise, or more as needed

1 to 2 tablespoons Creole or stone-ground mustard, or more to taste

In a large bowl, add the ham and celery and toss to combine.

In a small bowl, combine the dill, mayonnaise, mustard, Creole seasoning and cayenne, if using, and stir to incorporate. Add the mayonnaise mixture to the ham and stir to combine. If the salad is too dry, add a smidgen more mayonnaise. Taste, and adjust the mustard or cayenne as needed.

Serve as sandwich filling or with crackers.

Note: If you don’t have Cajun or Creole seasoning, add a pinch or two each of paprika, cayenne, garlic powder, onion powder, black pepper, and if desired, dried oregano, dried basil and dried thyme.

Recipe adapted from Ann Maloney of The Washington Post

6-8 ounces cheese such as gouda, gruyere or Monterey Jack, cut into pieces roughly the same size as the ham

In a separate bowl, whisk together the oil, vinegar, mustard, chives, dill, parsley, salt and pepper. Pour most of the dressing over the ham, cheese and vegetables and toss gently to coat.

Put the salad on a serving plate or in a large shallow bowl. Place the eggs around the edge of the salad, and drizzle with the rest of the dressing. Sprinkle with remaining herbs, if desired.

Note: I replaced most of the vinegar with brine from the pickles and omitted the salt. 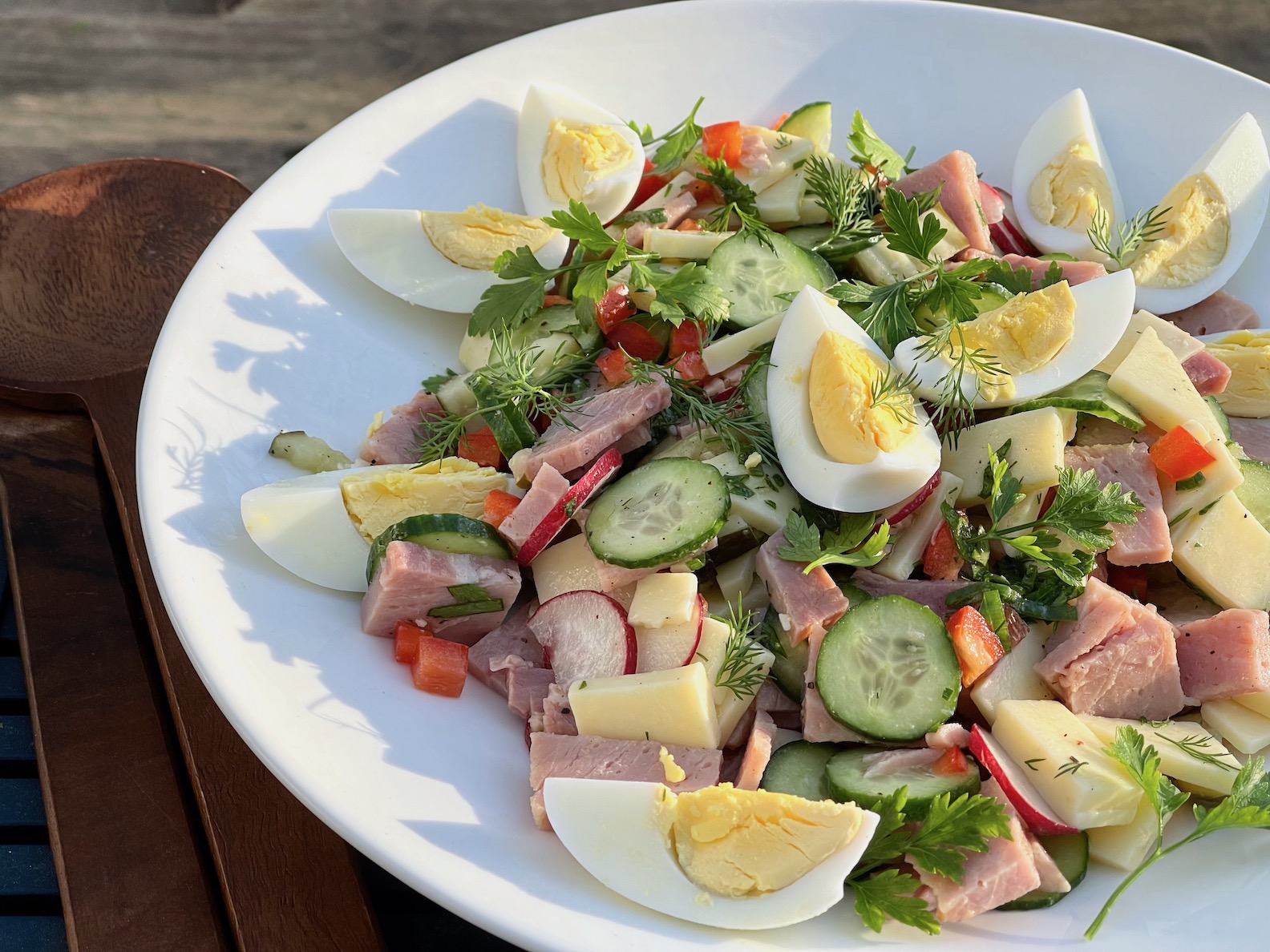 July 4, 2022
SEARCHING FOR WORDS OF ENCOURAGEMENT A Zen Meditation for the Fourth of July

July 4, 2022
SEARCHING FOR WORDS OF ENCOURAGEMENT A Zen Meditation for the Fourth of July