For 25 years Vancouver Islanders have been reading Eric Akis’ recipes in the Times Colonist.

Every Sunday and Wednesday you can find his column with delicious recipes and cooking tips, and he has also published several cookbooks. But of the thousands of recipes he has created and shared with all of the island’s home chefs, the MicCHEK Podcast wanted to know which recipes he considers the best-of-the-best — his top 10 favourites.

“Well, because I’ve created so many recipes over 25 years, it was pretty hard to choose 10 so I just sort of skimmed through a bunch of my files down in my basement,” he told podcast hosts Joe Perkins and Kyle Lancaster.

“I have a mountain stack of articles I’ve done and I went through them and thought about the ones that are my personal favourites and the ones readers have sent me notes on, and I ended up picking 10 of those recipes.”

All photos courtesy The Times Colonist.

“I’m a big fan of chowder but I really like chowder when you put in a bunch of different types of seafood. It’s really hearty and you can serve it with a baguette. It’s a good lunch in the winter time or whenever you have a craving for chowder.” 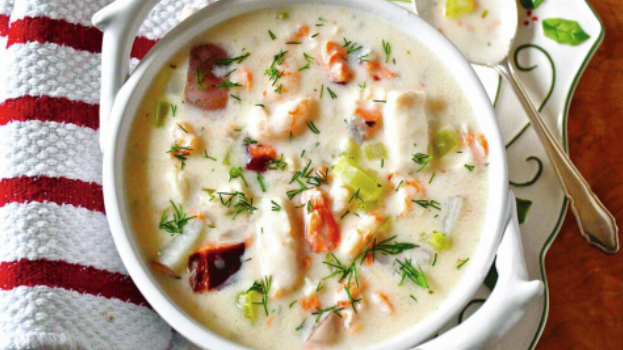 “In a few weeks local spot prawns will be in season and you can buy them live. In this recipe I’ve seasoned them sort of cajun style. You put them on a sheet pan with bell peppers, onions, chorizo sausage and then fire them in a hot oven. The aroma is amazing, the spot prawns roasting are just something else.” 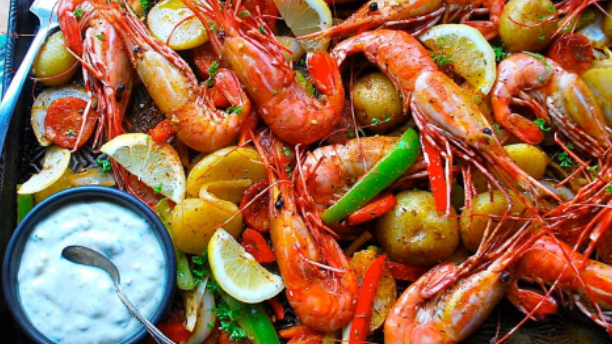 “So in this one it’s lobster tails that are split in half with scallops, prawns, some fish fillet and you put it in a baking dish or casserole and then you top it with a wine/butter/garlic mixture. Just shoot it in a hot oven and it’ll come out and look amazing and your wife or spouse will say “oh my gosh that looks fantastic”. It’s really simple to make and I’ve received tons of feedback on this one over the years.” 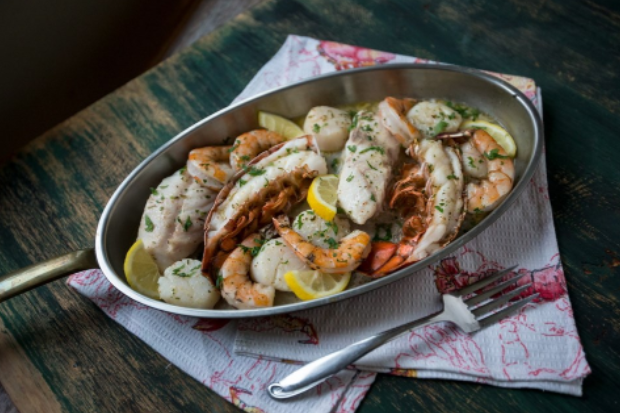 “I find that a lot of my readers especially in the winter time like comfort foods. I actually told readers that it would serve 8-10 people but I got a note from a family of four saying they had scarfed down the whole thing…they couldn’t stop eating it.” 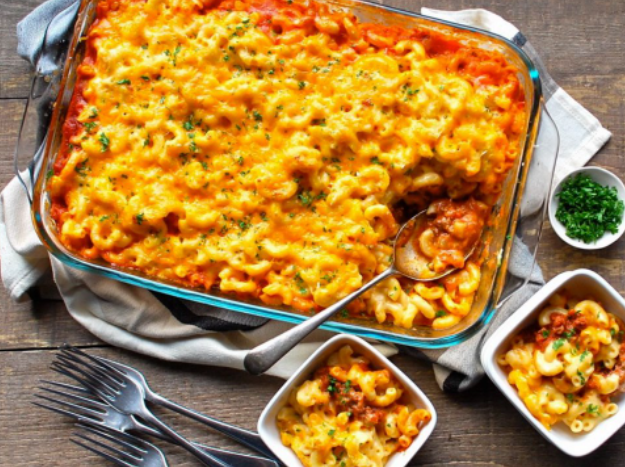 “This is a more fancy one that I did for a New Year’s Eve column. Marchand de Vin means wine merchant which gives you a clue that it’s a really rich wine sauce.” 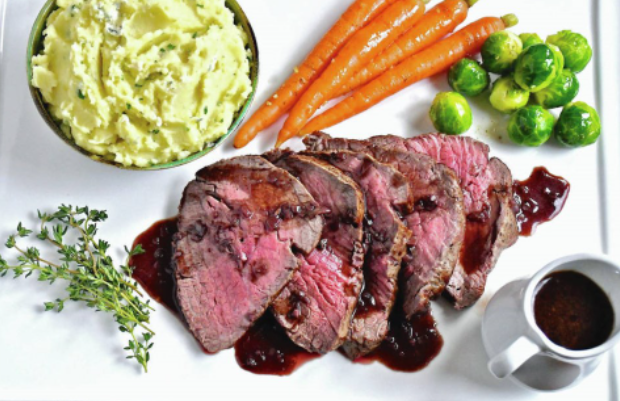 “This is a recipe I came up with when I was visiting my family in Thunder Bay. I was renting a cottage on Lake Superior and it was a really hot day and 20 people were coming out and I thought what am I going to serve them. So I bought a big ham, put it in a pan that was barbecue friendly, and cooked it on the barbecue. But before I did that I scored the ham so that it would nicely open up when you cooked it. And then I made a glaze with honey, mustard, and glaze. All the cooking was done outside and it was really popular.” 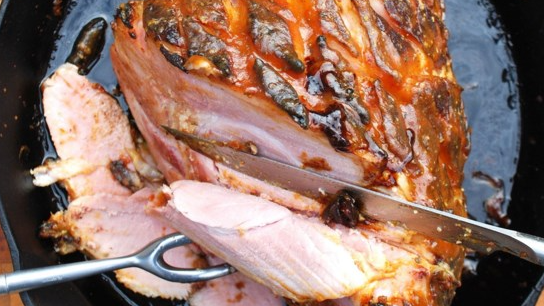 “This one is interesting in how you make the ribs tender. I take two half racks of pork back ribs, season them and then wrap them in foil and cook them in the oven. Within about 90 minutes they’re absolutely tender, there’s no liquid involved, they just kind of steam in the foil. Once that’s done you move them out to the barbeque and just char them until they’re nice and grilled and have a nice smoky aroma.

The Carolina-barbeque sauce is a mustard base sauce, not tomato, so it’s quite different. I actually had a letter to the editor about this recipe and the reader said Eric Akis’s recent Pork Back Ribs with Carolina-style Mustard Sauce was a killer. The man is a culinary genius and should consider running for Prime Minister.” 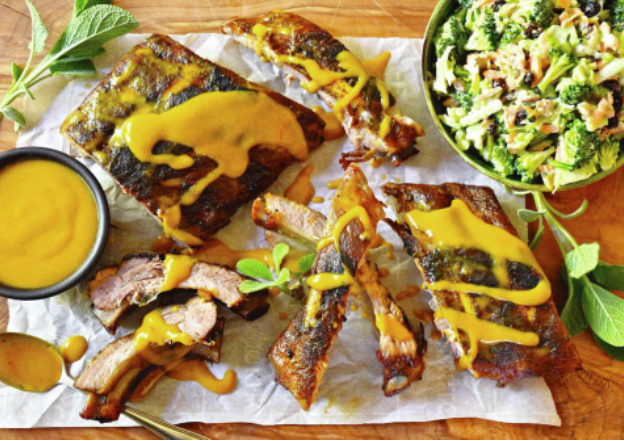 “It’s a rich pastry that you fill with sauteed onions and grated swiss cheese and then you top it with sliced local ripe tomatoes, some French Niçoise olives and a bit of Herbs de Provence which is a french style blend you can buy at most grocery stores. Then you bake it. It’s really nice in the summertime served with a nice green salad, and it looks great.” 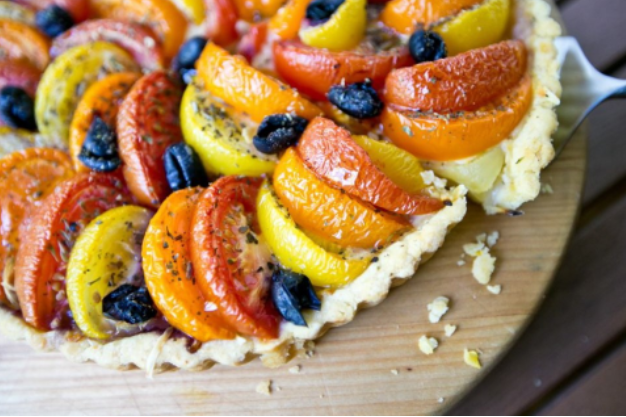 “When I was a chef I discovered that wrapping fish in phyllo pastry was a really good way, even if you overcooked it, to keep it moist and delicious. The added bonus is because you butter and layer the phyllo together, when you wrap the fish in it and it bakes, it’s golden and crispy and just delicious.” 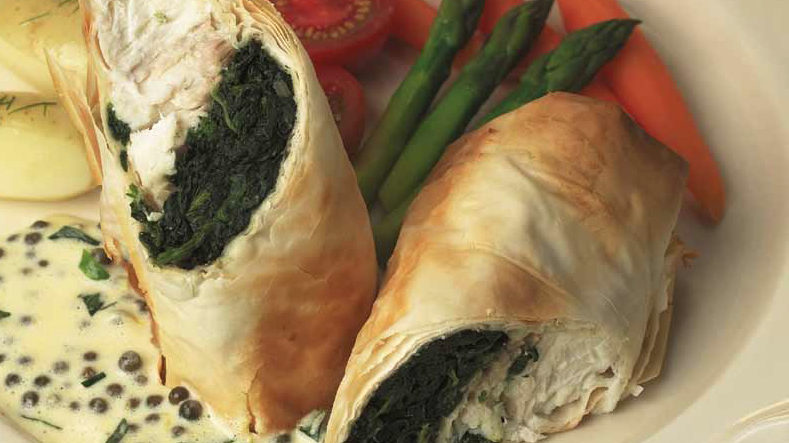 Squeeze all the moisture from the spinach and set aside. Heat the 1 Tbsp butter in a small skillet over medium heat. Add the shallot and garlic and cook until softened, about 2 minutes. Add the spinach and season with salt and pepper. Remove from the heat and set aside. Preheat the oven to 400 F. Lay a sheet of phyllo on a work surface. Brush lightly with melted butter. Top with another sheet and brush again. Repeat until all the sheets are used.

Cut the stacked sheets in half. Divide the spinach mixture and place near the bottom center of each sheet stack. Set the halibut on top of the spinach and season with salt and pepper. Fold the sides of the phyllo over to partially cover the halibut and then roll it up to form a package and seal the filling inside. Place these phyllo parcels of halibut on a parchment paper–lined baking tray. Brush the tops with butter. Bake in the middle of the oven for 20 to 25 minutes until puffed and golden.

Melt the butter in a pot set over medium heat. Add the shallot and cook until softened, about 2 minutes. Add the lemon juice and continue cooking until it has almost all evaporated. Pour in the cream and cook until it thickens slightly. Add the capers and chives. Season with salt and pepper. To serve, pour a pool of the sauce on 2 dinner plates. Cut each halibut phyllo parcel in half at a slight angle. Arrange the pieces over the sauce. Note: Phyllo pastry is sold frozen at most supermarkets. Thaw before using. Wrap leftover phyllo pastry in smaller portions before refreezing. The next time you need phyllo, you won’t have to thaw out the entire package to get what you want.

Other fish, such as salmon or cod, can replace the halibut. Instead of frozen chopped spinach, use a small bunch of fresh spinach, washed, stemmed, steamed, cooled, squeezed of excess moisture and chopped. If you are not fond of the taste of capers, simply omit them from the sauce.

“I thought I’d throw in a dessert. I did this for a Saint Patrick’s Day recipe. It’s a really dark chocolate cake and the Guinness adds this malty, coffee, dark flavour to it and it’s really quite something.” 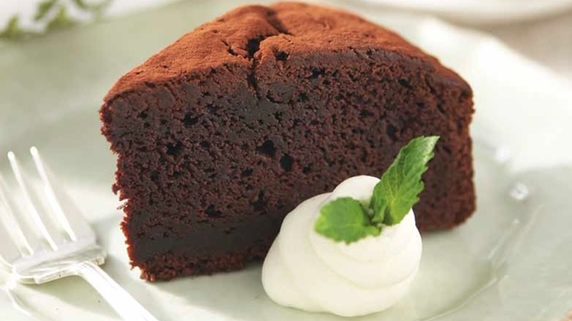 Lightly grease a 10-inch spring form cake, then set aside. Place the butter, Guinness and 2/3 cup cocoa powder in a medium pot and set over medium heat. Cook just until butter melts, whisking to combine it with the Guinness and cocoa. Remove from the heat and cool mixture to room temperature. Preheat oven to 350 F.

Place the flour, sugar, baking soda and salt in a bowl and whisk to combine. Add the beer mixture and beat thoroughly. Add the eggs and sour cream and beat until well combined. Pour batter into prepared pan and bake 70 to 75 minutes, or until a toothpick inserted into the middle comes out clean.

Place pan on a baking rack and cool to room temperature. Unmould cake and place on a cake plate. Dust top with a little icing sugar or cocoa. Serve wedges of cake with a scoop of vanilla ice cream, or a dollop of sweetened whipped cream, flavoured with Bailey’s or Irish whiskey, if desired.

Listen to Erik Akis make his top 10 selections on the MicCHEK Podcast.

MicCHEK Roundtables are released every Friday and are available wherever you listen to podcasts.